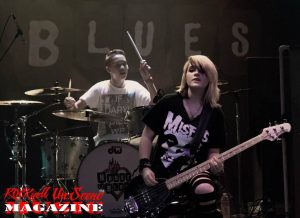 Tana Snyder, also known as “Spike,” is the bassist/backup vocalist for the bands Shot In The Dark and Hoity~Toity, and writes, plays keyboards and sings for her side project, Nandina. She has been playing bass since the age of eleven, and is the daughter of Scott Snyder, touring bassist for the Grammy nominated rock band, Great White.

“Spike” has played regularly at many venues and events throughout Southern California and Nevada. Notable events include: Wild Wild Fest, Get Busy Living Fest, as well as, the June 20th and June 25th dates of Vans Warped Tour 2014 in Shot In The Dark, and the August 8th date of Vans Warped Tour 2016 with Hoity~Toity. Venues included: House of Blues, M15, Chain Reaction, Vamp’d and many others. She’s opened for several prominent rock and hard-core acts including Escape The Fate, SECRETS, Attila, The Word Alive, We Came As Romans, Dead Rabbitts, Assuming We Survive, Alien Ant Farm and The Tubes.

Tana is currently endorsed with the bass/guitar manufacturing company, Spector, attends the music program at Norco College, writes her own music, and is a fiction author.